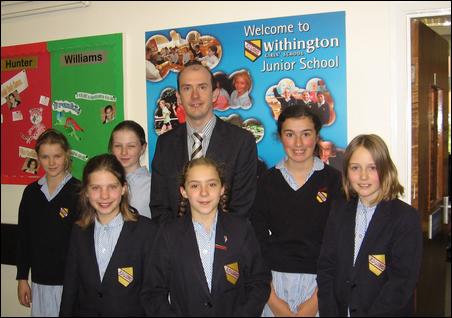 This term's Junior Philsoc lecture was on The Magic of Maths. Mr Hodgson, the Head of Maths in the Senior School, came down to talk to Upper II and the MGS Year 6 about ‘clock' maths. It was very interactive and we were always doing activities. The funniest part was when he asked us six plus seven. Everyone said thirteen (rightly!). He told us the answer was one! We were all puzzled until he explained that he was using the 12 hour clock (mod 12) and once it got to 12 – it went back to one. Mr Hodgson even taught us a trick of how to tell if a barcode was wrong! Both schools really enjoyed the lecture and big thanks to Mr Hodgson!
By T Kwartz
—
On Thursday afternoon the MGS boys joined our class for a lecture by Mr Hodgson, the Head of Mathematics at Withington. He talked about the type of Mathematics that is studied at University level called ‘Modular Maths' aka clock arithmetic. He talked about it in detail, covering every relevant point. The lecture was very helpful for several reasons. The first reason being that he showed us symbols such as ≡ , so if we saw it anywhere it wouldn't be alien to us. Another reason is because he told us that the ISBN, which is on the back of every book, is related to modular maths. The last reason was because we had something to brag about when we went home! We would like to thank Mr Hodgson very much for giving up his time to prepare the lecture for us.
By C Fard