Withington’s pupils responded magnificently to an appeal for books to be donated to the Wood Street Mission to help tackle educational poverty in Manchester. 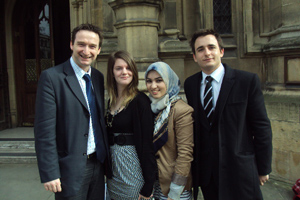 The appeal was launched at an Assembly addressed by Andrei Constantin, Muna Abbas and Yael Collins from Manchester University who were taking part in the undergraduate ParliaMentors programme in which students of diverse faiths collaborate on social action projects.

The trio had expected about 100 books to be donated, but their address to 550 Withington pupils struck a chord and they were greeted by 567 books.

Mr Vincent Sharples, the School’s Head of Religious Studies, told the trio: “You were very impressive speakers and the girls were clearly captivated by what you had to say, both on the importance of education generally and the way you explained the reality of the lives of some young people in Manchester.”

Jan O’Connor, manager of the Wood Street Mission echoed: “Your contribution to our work really will make a difference to these local families.”

More about the project can be read at: http://www.threefaithsforum.org.uk/newsletter/2011/04/trio.html