Penalty! More female football referees are on the way! 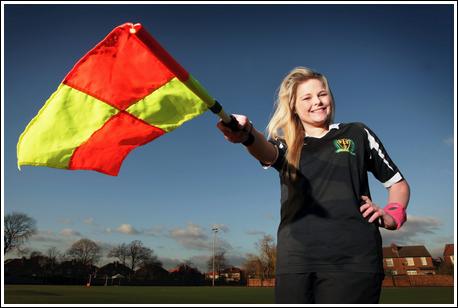 Gray was sacked from his £1.7m a year job and Keys resigned after being caught making off-air sexist remarks about female assistant referee Sian Massey’s ability to understand the offside rule before the Premier League clash between Liverpool and Wolves at the end of January. For Jasmin, 18, who officiates in Sunday league matches around Stockport and has run the line in the Cheshire League, regularly has to put up with similar jibes from the touchline during matches.

Jasmin, who is hoping for a career in medicine, said: “I think the fact their remarks became such a scandal is because of who they are. But their views haven’t put me off. It’s more of a challenge because I deal with that kind of stuff every week and just shrug it off. Maybe the controversy will highlight that women referees can do a good job in the game.”

Jasmin, who captains Withington’s netball team and has represented Cheshire at the sport since she was 12, began refereeing football three years ago reckons she’s shown the red card to about 30 players.

Jasmin said: “I’m determined to keep at it and my next development stage as a referee will be stepping up to officiate in Cheshire League matches.  There will be more women coming through – don’t forget that Sian Massey demonstrated just how well she knew the offside rule by getting the most contentious decision in the match absolutely right.”

Read the story in the Manchester Evening News here.