In a first for Withington, the School staged a local version of the BBC's Question Time before an audience of more than 300 in the Arts Centre on the evening of 16th December.

The event, which attracted a panel of leading North West academics, politicians and media personalities, raised more than £2,200 towards a community building project planned by the 14-strong party of Withington pupils on their World Challenge expedition to Tanzania next summer.

The evening was initiated by Sixth Former Hannah Fitzgerald who applied many times to be a member of the audience on BBC television's Question Time, but was never successful. Hannah said: "We were brainstorming about how to raise funds for the trip and I suggested hosting a Question Time. From there, I was fortunate that Gordon Burns and the panellists so generously agreed to take part." 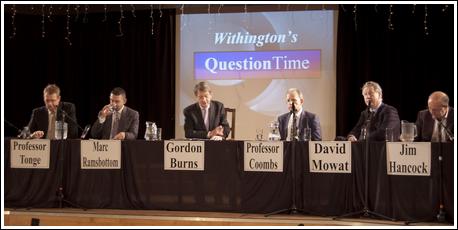 During the entertaining and informative two-hour session, questions covered a wide range of topical and controversial issues ranging from whether democracy is aided or undermined by WikiLeaks' revelations through to whether the general election TV debates had rendered political ideology less likely to win votes than party leaders' looks. Debate also centred on whether Britain had become America's 51st state; the chances of the Coalition Government lasting a full five-year Parliamentary term; which of Labour's Miliband brothers would have posed the greater threat in Opposition and whether politicians ever took any notice of protest.

But the hottest topic was sparked by the question: "Could universities survive in the current economic climate without increasing tuition fees and would the cap be lowered if the economic climate improved?"

Prof Coombs' succinct reply was "No and no." There was general consensus from the academics and the Conservative and Liberal Democrat representatives on the panel that there was little alternative but to increase fees, though Coun Ramsbottom admitted that he had accepted this conclusion with ‘a heavy heart'.

Lord Bradley opined that the sheer size of the increase stemmed from the Government's 80 per cent funding cut, which was far greater than budget cuts imposed elsewhere in the economy. Jim Hancock said there were too many universities offering inconsequential degrees and predicted a ‘shake out' of higher education in due course. David Mowat added that, while provision for the 40 per cent of school leavers who progress to university was important, it was also essential to remember that similar weight should be given to providing further education and training for the remaining 60 per cent.

The School's World Challenge Coordinator Ms Kaeren Browning closed the evening by thanking Gordon Burns and the panellists for giving up their time to facilitate what had turned out to be a most thought-provoking and entertaining evening.