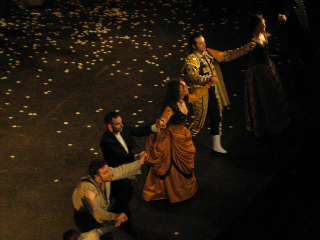 I first met Christine when she was 17, I was 7. I am sure I was decidedly more impressed with Christine than Christine was with me. She babysat for my brother and I and my mum used to lay out Ribena on the kitchen worktop and maybe a digestive biscuit or two. Christine was beautiful even then with high cheek bones (famously the mark of a good singer). I had a head of clumsy tight curls which never seemed to grow any longer – a firm family favourite is to recant how it took 2 years for me to grow any hair at all. Christine, on the other hand, had tumbling dark locks (not curls, definitely locks) which framed an expressive and open face of porcelain complexion with eyes of a brilliant blue. I remember all this quite clearly, as little girls do. Christine went to WGS, she was bright, articulate and down to earth. My parents liked her and as a result, they encouraged me to apply, aged 7.

Christine Rice has come a long way since she left Withington in 1988 to read Physics at Balliol College, Oxford. She has continued on the same trajectory making an impression without fail on those around her, you can tell. She gained her Physics undergraduate degree, an MSc and embarked on a PhD in the same field at Oxford, before deciding to pursue what was her true passion: music or more precisely: the Voice.

Taking what she later described as a "Gap Year" to pursue her love of performance, fostered in productions at university, Christine took singing lessons at the Royal Northern College of Music with Robert Alderson, following the advice that if she "sticks with this, [she] will be a working singer". And fated words they were. Rationalising in her down-to-earth manner, Christine recently told the Sunday Times Magazine with a smile that "nobody pledges more than that". What must have been a bold step into the unknown led Christine to graduate a trained mezzo soprano and the rest, as they say…

Lead roles in Opera Houses around the world ensued. Christine's rise is nothing short of astounding. This production of Carmen is the first opera to be filmed in 3D (opera going audiences are dwindling). Part of the process to translate Carmen onto the big 3D screen requires that steadicams whizz around the stage, ducking in and out of the action. And Christine sings aria after aria of Bizet's classic, seemingly oblivious to the extra distraction around her. The ex-Withingtonian remains the consummate professional.

Critics praise her, her peers respect her and it is clear that the opera going audience love her. I too spot Christine's keen sense of performance and technical skill. Her lower register is rich and warm and with my eyes closed I can still see the fiery, controlling manipulatrice Carmen. Her spoken French, accurate and delivered with a perfect Gallic accent does not escape my linguist ears and serves as testament to Christine's eye for detail. The industry, it seems, has not missed this either -Christine was nominated in February 2009 for an Olivier Award for outstanding achievement in opera and the list of accolades goes on. 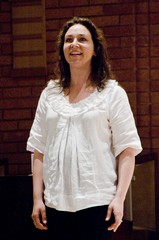 Remaining good friends with Withington, Christine has come back to School to sing more than once. Most recently we were lucky enough to welcome her last year after she conducted a masterclass at the Royal Northern College of Music for young mezzo-soprano hopefuls. Christine sang the O Don Fatale aria from Verdi's Don Carlos in a special school assembly – a special moment. She was gracious and warm and enjoyed taking a tour around school to see the changes which have taken place since her time as a pupil. At this point, Christine was expecting her fourth child. Yes, her fourth.

So, over 20 years after those dark curls entered my world for the first time at home in Didsbury, I file into the Royal Opera House box with my family, eagerly awaiting the curtain to rise as the overture to Bizet's Carmen greets the first scene. 19th Century Spain is laid out before us, complete with donkey and chickens. A crowd of writhing Mediterranean bodies (for those of you who have not seen it, the opera is famously racy) part to let Carmen, the star of the show through, the centre of everyone's attention. And there is our Christine, sparkling. She looks beautiful, those lovely dark locks make a return, but this time they have been transformed into sultry Mediterranean tresses and from 50 ft away, I can see those blue eyes flashing as she takes on the lead role of seductress Carmen.

After much action, which I will not spoil for those of you whom are not familiar with the story, Christine takes her bow to rapturous applause. My mum and dad nudge my arm and my brother suggests we ought to send a bouquet back stage. After all, she is an international opera star now. We take a photo of her curtain call from our seats and I know I won't forget seeing her up there for a long time. After all, she was the reason I came to Withington all those years ago.

We look forward to following Christine's career with joy and hope that as many of you will have the opportunity to see her in her milieu – the set of a live opera.