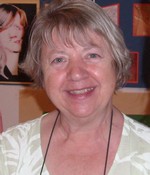 The weeks leading up to June 19 were fairly frenzied. Phones rang, emails whizzed, lists were produced and updated, food was ordered and expectations grew. Clare and Laura excelled themselves with charts and plans; they assembled souvenirs; they mobilised helpers to entertain visiting children and their attention to detail was amazing.

Meanwhile, Val Hempstock and Barbara Klein were assembling memorabilia and sorting out DVDs of past school productions; the I.T. department worked to sort out the technology; school's architect produced plans and the committee ran round and round.

We gathered at school around 9.00am and assembled displays, the souvenir table and visitor badges. There were problems on some main roads, just to add to the tension, but by 10.15am smiling visitors started to arrive and we were off.

From then on it was so much fun! How the catering staff managed so serenely we shall never know. Drinks were available on arrival; picnic lunches were served; then a sumptuous afternoon tea was provided. Later on a wonderful three-course meal was served by the second team. We certainly did not go hungry.

There were two Founders' Day style assemblies, one in the morning and one in the afternoon. We sang Go Forth with God, had the traditional readings of the Founders and Let us now praise Famous Men, sang Gaudeamus and enjoyed Mrs. Pickering's welcome and a viewing of a five minute film featuring Miss Hulme and Mrs. Kenyon, who were the morning's platform party and Mrs. Pickering and Mrs. Marks. Chris Holmes joined us to play and later in the afternoon delighted us with his accompaniment to the slightly jerky school film. Happy days.

There were activities like hat-making and origami for the children, and, as always, tours of school with its new sixth form area and various other wonderful new features were really successful.

It was genuinely thrilling and heart warming to see so many of you. We needed more time to chat since how time flew. My legs were quite tired by 11.30pm; a serious hike is nothing to a Withington reunion. We all drank gallons of water as often as possible because of all the talking and running about.

Thank you to everyone who made it such a special day, particularly those of you who travelled long distances to be with us. Do keep in touch. We still need some quiz answers; no-one had time to fill them in!