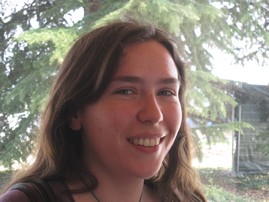 Alumna Sky French (2004 Year leaver) rolled out the red carpet to some fellow Withingtonians recently, as she welcomed a group of 17 Withington Sixth Form students during their trip to the CERN Nuclear research facility near Geneva, Switzerland.

Sky, who left Withington in 2004 to study an MSci in Natural Sciences at Peterhouse, Cambridge, moved to Switzerland in December 2009 to work at CERN as part of her PhD in Experimental High Energy Physics, and is working on the ATLAS experiment to attempt to discover Supersymmetry in particle physics.

Sky was delighted to see some fellow "warm and enthusiastic" Withingtonians, and recalls with warmth her studies at Withington, which she feels gave her the strong foundation that enabled her to embark upon her current studies:

"I remember very many enjoyable physics lessons at Withington with Dr Wheeler, Dr Verity, Mrs Rimmer and Mrs Lindsay-Dunn – taking photos outside with pin-hole cameras, school trip to Jodrell Bank, even my first introduction to the particle physics I do now! 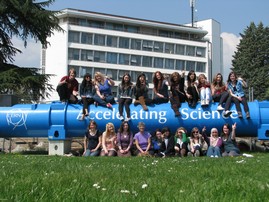 Sky with the WGS party outside CERN.
For a full photo gallery from the trip, click here

"My fondest memories of Withington are without a doubt maths lessons with Mrs Willson – maths being an essential foundation for the university physics I encountered at Cambridge. I will never forget the encouragement she gave me to work hard and do well."

The group of WGS students, led by Dr Francisca Wheeler, former Head of Physics at WGS and Sky's former teacher, were visiting CERN as part of their A Level Physics studies. During their trip, they were able to see the cutting edge Large Hadron Collier, the biggest and most powerful particle accelerator in the world, which has only been functional since November 2009 last year.

The group also saw an exhibit containing the server upon which the world wide web first began in 1990, and visited a warehouse where CERN staff demonstrated how the electro-magnets used to accelerate particles were constructed, explaining how they were kept cool using liquid helium held at 1.9K (-271.25 °C).

The girls returned from CERN, tired but inspired, to continue to prepare for their forthcoming AS and A Level examinations in June. We look forward to hearing further news of Sky's progress with her PhD, and send her our sincere thanks for making our current pupils feel so welcome.