Particle Physics – Past, Present and Future

On 22nd April, Professor F K Loebinger, Leader of the Manchester team working on the ATLAS experiment at the Large Hadron Collider at CERN gave a lecture in the Arts Centre about the basic building blocks which make up the Universe, the promise of the Large Hadron Collider and pointers to the future. Prof Loebinger's extremely clear presentation enlightened the entire audience, both physicists and laymen alike and a lively question and answer session ensued at the end. 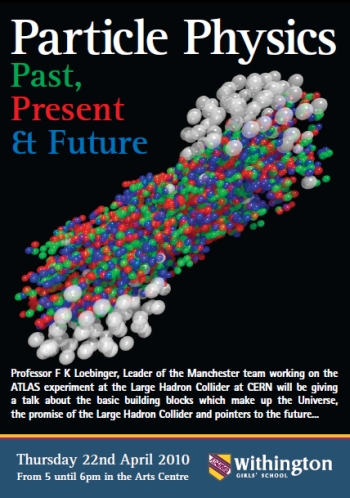 The talk was particularly beneficial for girls studying GCSE or A-Level Physics and was especially pertinent for the girls who were going  trip to CERN in Geneva the following week. The topic was also relevant for A-Level General Studies pupils but was also attended by parents, staff and other pupils interested in Physics.