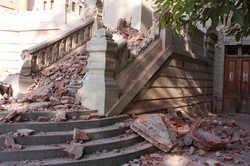 Alumnae will no doubt already be aware of the devastating earthquake which struck Chile on Saturday 27 February. The quake, which measured 8.5 on the Richter scale in Santiago and 8.8 in Concepción, is the seventh most powerful on record, and it is believed that almost two million Chileans have been affected by the disaster.

A Withington Alumna now living in Santiago, Nicola Gordon [1975 Year Leaver], contacted School today to assure us of her safety, and sent us an account of her personal experience of the earthquake, along with some photographs she has taken of the devastation:

"I live on the 10th floor and everything was falling. I couldn't see anything because it was dark and it didn't even occur to me to switch the light on, but such a big quake would have meant the power would have gone out anyway which was probably just as well, as it would have been more frightening to see everything falling.  Moreover, the noise alone is terrifying. 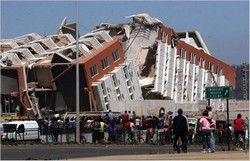 "All I could think of was to get my camera, as I have NEVER managed to film a quake since coming to live in Chile in 1981. On the occasion of the last big quake in Chile in 1985, I had been just about to go out when the quake started and spent the two quakes, one after another, screaming down the staircase! Afterwards, I was annoyed that I had not made it outside, which would have been more dangerous of course because of the falling debris, breaking windows and swaying lampposts and telegraph poles, but there was a park just opposite from where I lived at that time and it would have been great to have the earth literally move for me and to see the highrise appartment buildings sway from side to side. This time I was unlucky too, as it happened at night.

"This was the first time that I have been in a quake so strong that I could not even walk properly, but for some reason I was not scared at all. Luckily I did not make it to the door of the flat, as huge chunks of plaster were falling down which would have knocked me out. It took me about an hour to walk back to my bedroom to get dressed because of everything which had fallen on the floor. I always thought that I would die buried under all my junk without even having an earthquake and yesterday indeed this was nearly the case!

"On Saturday I went to take pictures in the Providencia of the church whose bell tower fell down.  On Sunday I went to the town centre, after never making it there for some strange reason after the 1985 quake.  That earthquake measured 7.8 on the Richter scale, with the epicentre in San Antonio on the coast, and despite not being as strong as this year's quake, the damage caused then in Santiago was much greater. The Roman or Greek columns of the Muncipal theatre were at all angles and some had fallen, several churches were destroyed, and many of the very old and former palatial buildings which had seen better times collapsed internally, leaving only the facades remaining.  Despite this photographer's paradise, on that occasion I stayed put and did not explore the town centre, so I swore that if I ever had to live through anything so terrifying again, I would venture out with my camara and record the after-effects for myself. 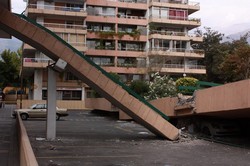 "In Santiago a ‘spaghetti junction' collapsed, but amazingly although there were cars on the road at 3.30 am when the quake occurred, no one was killed. Whilst the devastation here in Santiago is terrible, down in the south it is a disaster. The tsunami caused by the quake meant that a boat ended up in the town square in Talcahuano! Five people were killed and 11 remain missing on Robin Crusoe Island, about 500 km west of Valparaiso, which I visited about 15 years ago. It's a nice place, where you eat lobster for breakfast, dinner and tea, and its small population, many descended from British and Scottish sailors, will have been hugely affected by such losses. We later learned that there had been a huge tsunami on the coast about 400 km south of Santiago and that many people have lost their homes and their lives. The death toll is 700 and rising, in comparison to 177 in 1985.

"Today I went to visit a condominium which was built in 1970 in uptown Santiago. It survived the 1985 quake, but apparently the reinforcement of a square under which was a carpark was not carried out and on this occasion it fell, crushing all the cars below.  The building will now have to be dinamited to clear up the mess. Luckily, because the quake occurred during the early hours no one was in any of the cars – if it had happened earlier on in the day, there would have been many deaths to lament. Whilst there, I met several architects who had come to see what had happened to the building.

"At least these natural disasters have their positive side, as it is a good way to meet the neighbours and have a chat! On the first night after the quake, I slept with my torch and a rucksack with my camera equipment and warm clothing, in case of another quake and indeed the aftershocks keep on coming, but the next day people were playing tennis at the club next door, so it is back to business as usual, and back to work, which terrifies me more than any earthquake!" 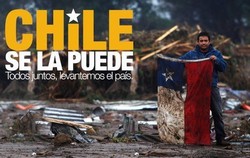