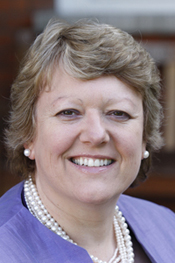 Mrs Sue Marks has been appointed as Withington’s tenth Headmistress and will take up her post in September 2010.

Mrs Marks moved to Wilmslow from North Wales at the age of 14 and was educated at Wilmslow County Grammar School for Girls and Jesus College, Oxford.  Although teaching is very much in her family background, with a grandfather, two uncles and two aunts having been involved in the profession at various levels, Mrs Marks enjoyed a successful career in international finance in the City of London before following in their footsteps.

She joined St George’s College, Weybridge as Head of Social Sciences from where she moved to Tormead School, Guildford as Head of Sixth Form, a position she held for just twelve months before being promoted to Headmistress in 2001.

Mrs Marks is very much looking forward to returning to the North West and to “following Mrs Pickering, a Head I greatly admire, at a wonderful school whose reputation I was aware of when I was at school myself”.

She said her appointment was “the chance of a lifetime to lead such a fantastic school in the part of the world that I have never stopped calling my home”.

Mrs Marks describes herself as “an avid and eclectic reader” and enjoys going to the theatre and watching sport. Her main 'outside interest' is looking after her family and she is also actively involved in her local church.

She added: “I plan to spend my first couple of terms at Withington taking every opportunity I can to get to know the girls, parents, staff, governors and the local community and to understand the history, ethos and dynamic of WGS.”