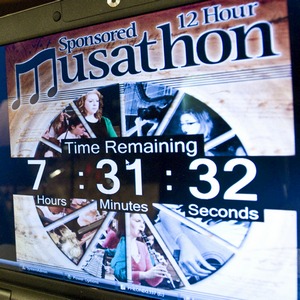 The school's 12-hour Musathon on Saturday, 30th January, has already raised more than £2000 for the victims of the Haiti earthquake.

The non-stop round-the-clock programme of music and workshops involved 249 Withington pupils, members of staff and a number of highly respected professional musicians.

Mrs Pickering, echoing the title of Lou Reed's 1997 chart-topping Children in Need anthem, said : "It was such a perfect day – an amazing tribute to the depth and breadth of musical talent at the School. It was Withington at its absolute best."

The event, sponsored by H Wright Greaves Ltd, the Altrincham music specialists, had been originally planned as a fundraiser for the Parent Teacher Association, but the School seized the opportunity to play its part in helping the victims of the disaster in Haiti and the bulk of the Musathon proceeds will go towards supporting relief efforts on the shattered Caribbean Island. More than £1,000 was raised on the day and much more is coming in through sponsorship.

The 12 hours, from 9am to 9pm, were divided into 15-minute slots during which individual girls and all the groups and musical ensembles throughout the school, together with members of staff, performed a hugely varied repertoire.

View a picture gallery of the Musathon


Running parallel to the performances before an audience of parents, families and friends in the Arts Centre, a series of workshops were conducted by professional musicians in the School's foyer, Junior Resource Room and Music Room.

Members of the PTA lent their support all day, providing refreshments, and photographs of the session were taken, printed and put on immediate sale by site manager Mr Mark Morris and reprographics technician Mrs Sharon Burney, raising further funds.

The Musathon also had its own digital clock, devised by IT technician Mr Chris Keenan, counting down the 12 hours to the finale. The programme actually ended at around 9.05pm with the Senior Orchestra and parents on stage. "It was a case of  …  we've started, so we'll finish," said a delighted Head of Music, Mrs Gillian Sargent, who initiated and co-ordinated the event.
"There was so much music making and so much fun," said Mrs Sargent. "The girls were fantastic and I've never known 12 hours fly by so quickly. The day was a memory that as a teacher, you will treasure for ever."

Mrs Pickering added: "Two things stick in my mind – the sight of girls rushing straight from the hockey pitch to perform still wearing shin pads and of one Junior girl who went to sit at the back of the stage in tears, even though her performance had been very accomplished, being spontaneously hugged by the girl next to her.

It really was an amazing day."