An extravaganza of Withington Christmas music was launched on Sunday December 6th when the School's 70-strong Senior Choir, conducted by Miss Amy Holland and accompanied by Mrs Sharon Senn, performed at the St Ann's Hospice Tree of Lights service at Manchester Cathedral.


The annual Carol Service at St Ann's Church followed on Monday December 7th. For the first time the service has been recorded on CD to be sold in aid of the Wood Street Mission, St Ann's Church and the School's 100-Plus Bursary Appeal. The CDs will be sold for £10 plus £2 postage and packaging. [To order a CD to be posted to you in time for Christmas 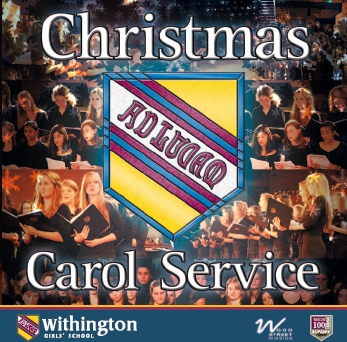 , please download and print an order form and send it to School for the attention of Mr V Sharples]

Rehearsals were preceded by an impromptu 20-minute performance of acapella three-part harmony carols outside the church, which drew a large crowd from the busy Christmas market nearby.

The evening service itself, devised by Simon Leach, involved the Senior Choir conducted by Head of Music Mrs Gillian Sargent and the Chamber Choir conducted by Ms Fiona Clucas. Lower Sixth former Joanne Butler, who has only recently taken up the organ, played the music for the choirs' procession into the church.

The busy festive programme continued on December 10th with the annual Rotarians' Christmas Party for which the Senior Choir, Senior Orchestra and a number of soloists, some from the lower school, led community singing of old favourites.