Though Withington’s WiGs4Life fun run raised more than £6,000 for Christie’s this year, Form L6J decided to “keep on running” for the world-renowned cancer hospital just down the road from the School. 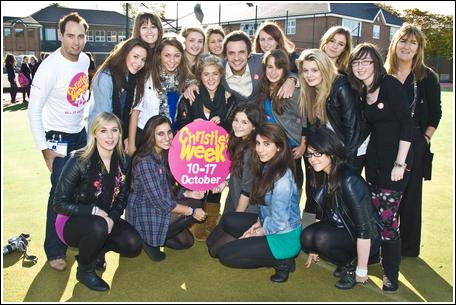 With the onset of Christie’s Week, the girls and their Form Teacher Mrs Jane Maher decided to adopt the cause as the Form Charity. The girls organised a series of fund-raising events including Assassins – which is still running – guessing the number of sweets in a jar, the sale of Christie’s merchandise and, most spectacular of all, a Balloon Race.

Almost 300 bio-degradable balloons with bio-degradable tags were sold and released into a clear blue sky – which proved a great photo opportunity for what seemed like the whole school.

So far there have been many returns from as far as Worcester – about 90 miles away. The closing date has been set for Christmas.

Mrs Maher took part in the 5k 'Night of Neon' run on Saturday 24th October, ahead of the 10k walk around Salford Quays and will add her sponsor money to L6J’s charity total.

See a picture gallery of the balloon release