Withington welcomed Baroness Henig of Lancaster on Friday, October 16th as part of an outreach programme designed to explain the working of the House of Lords to young people. 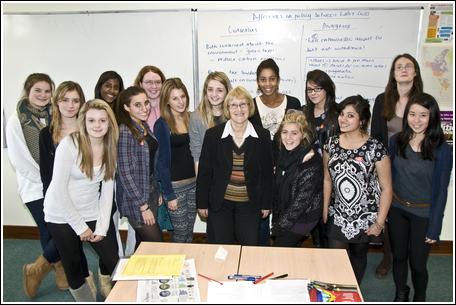 Baroness Henig, former Lancashire Councillor and Chairman of the County Council and current President of the Association of Police Authorities, was made a peer in 2005 and takes a special interest in policing issues and the criminal justice system.

She fielded a raft of probing questions from Sixth Formers with whom she spent more than an hour, not least about the future of the House of Lords itself.

"It's a very odd place at the moment," she admitted, "The House is in transition, but in transition to what? The next election will be key to answering that question because all three main parties have their own slightly different takes on future reform."

The girls also quizzed Lady Henig about her thoughts on the result o the next election, the workings of the new Supreme Court, media coverage of politics and the Iraq War.

Asked what has been the most interesting recent House of Lords debate, she replied: "Without doubt the debate about the right to die – a fundamental issue that engendered real emotion."