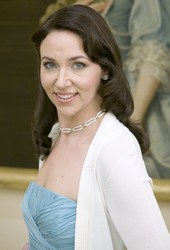 Acclaimed mezzo-soprano and Old Girl Christine Rice returned to school to sing the O Don Fatale aria from Verdi's opera Don Carlos to a full Arts Centre on June 23. Christine is the second illustrious visitor to grace the Arts Centre stage this summer term after Withington girls greeted the newly-appointed and first ever female Poet Laureate Carol Ann Duffy in May.

This time, however, the famous artist was entirely "home grown". Christine left Withington for Balliol College Oxford in 1988 – to pursue a career as a physicist. After reading her undergraduate degree at Balliol College Christine gained an MSc at Wolfson College, before her dramatic switch of vocation. In the assembly full of Withington girls earlier this week, Christine explained that she took a Gap Year following her Masters to pursue her love of performance which she had been fostering in productions at university. Singing lessons ensued at the Royal Northern College of Music and five years later, Christine graduated a trained mezzo soprano after her vocal teacher recognised very early on her potential. Christine's rise has been nothing short of astounding and she now sings leading operatic roles and concerts all over the world.

Christine had been a drama enthusiast since school, performing in the Manchester Youth Theatre and after, at University. Teachers and pupils remember Christine in early productions at school, notably Noye's Fludde by Benjamin Britten in 1988, a large scale joint production from the Music and English departments with much help from Mrs Diane Connell in the Art department who produced some of the most imaginative costumes school had ever seen. Christine won one of the lead roles in her Upper Sixth year as Mrs Noye and thrilled audiences with her early talent. Mrs Christine Manning, who taught Christine music at O Level returned last Tuesday to school to hear her former pupil perform on the same stage 21 years later, now as a full matured mezzo soprano, said "Christine was clearly a talented girl and very clever too. She had a very good, promising voice at school and it was just such a pleasure to hear her today." Mrs Val Hempstock, who is a school Governor, a former teacher and Old Girl herself echoed our own sentiments: "We are all very proud of her".

Accompanied in the School Arts Centre by her husband Crispin Woodhead, himself an experienced and accomplished pianist and former Head of Modern Languages at Rugby School, Christine sang the aria O Don Fatale from Verdi's opera Don Carlos. A truly international star, she sings in Czech, Hungarian and Russian as well as French, Italian and English. Christine, who is expecting her fourth child, engaged in a Question and Answer session with pupils before touring the School with Headmistress Mrs Janet Pickering and Mrs Val Hempstock.

Christine's visit to Withington followed her delivering a master class to a new generation of opera hopefuls at the RNCM the previous evening. As she toured familiar buildings and classrooms, Christine said: "There have been huge changes. The atmosphere is so vibrant – absolutely stunning. It was a wonderful academic school when I was here but it seems to have sprung to life; so very modern and so very fresh."

Members of staff, former staff and girls have commented on how charming and friendly Christine was. We are privileged to have had this unique opportunity to hear an intimate performance from one of our Old Girls.

Christine's journey from reading physics at University to her position today as one of the world's most accomplished mezzo soprano's is an inspiration to our girls and our Alumnae.