The first-ever female Poet Laureate Carol Ann Duffy held the entire Senior School spellbound with an hour-long reading of her verse in the Arts Centre.

Her performance, the first in any school since her recent appointment, included poems not yet published, affording Withington an exclusive preview of her work. 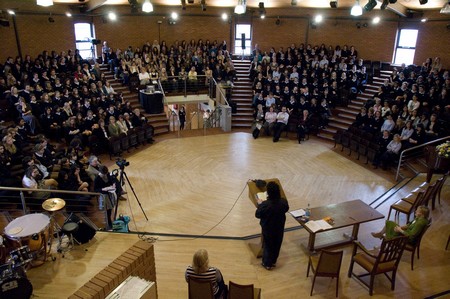 The poems, many written for her own daughter, now 14, conveyed humour, pathos, love and much thoughtful provocation. She introduced pupils to her imaginary take on classical literature from Ovid to Aesop, introducing characters like Mrs Midas and Mrs Tiresias from her book The World's Wife and The Loch Ness Monster's Husband. Her hilarious modern epic, The Laughter of Stafford High, had her Withington audience in fits of laughter too. 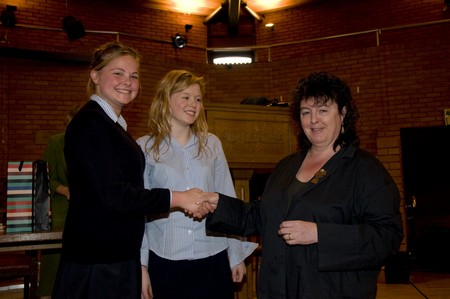 Ms Duffy, no stranger to the School, having rehearsed Manchester Carols in the Arts Centre and having been one of the first guests at the School's Poetry Club, also responded to questions from girls about her poetry and her appointment. 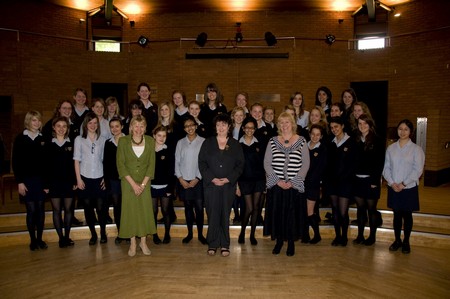 Asked how she felt about writing "official poetry" in her historic role, Ms Duffy said that in her pre-appointment conversations with officials from government and Buckingham Palace it emerged that there was actually no requirement to write anything at all. But, she added, tongue in cheek, that she had begun to write a poem about national events: "What do we do with the trust of your vote/ Hire a flunkey to flush out the moat…"

Ms Duffy also responded readily when asked about the withdrawal of the anthology that included the poem Education for Leisure from the AQA GCSE curriculum on the alleged grounds that its theme was too violent. She explained that the ban was the result of a misreading of the poem, which examined the causes of drug taking and crime, and was attempting to move young people away from that.

"The reader sometimes has to work as hard as the poet in the search for meaning," Ms Duffy added. "I feel sorry for students for being patronised."

Ms Duffy revealed that she had been inspired by many poets but had been encouraged to start writing by a teacher at school. "When I was about 11 a teacher typed out some of the poems I had written and seeing them presented in a way that others could read them made them seem important, almost glamorous and gave me a huge boost."