Official opening of the new wing

Professor Alan Gilbert, President and Vice Chancellor of the University of Manchester, challenged Withington pupils to use the "precious inheritance" of their education to help others through dangerous times. 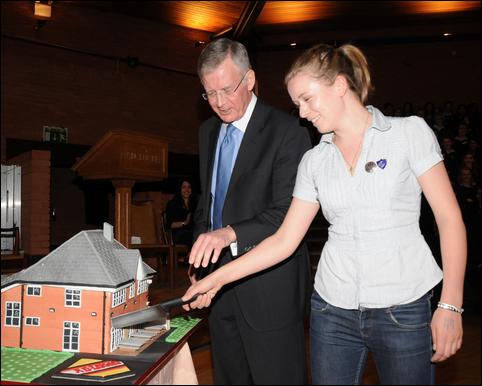 
Officially opening School's new wing, Prof Gilbert told Senior pupils: "This school of yours is a great school by any standards, providing you with an education as good as you can get in the very best secondary schools anywhere in the world."

Prof Gilbert said that in the 21st Century, knowledge would be the most dynamic source of wealth and ignorance the most intractable cause of poverty. "So what are you going to do with the precious inheritance of a Withington education?" he asked. How much responsibility were they willing to take in using their advantage to meet the challenges of what he described as "dangerous times". 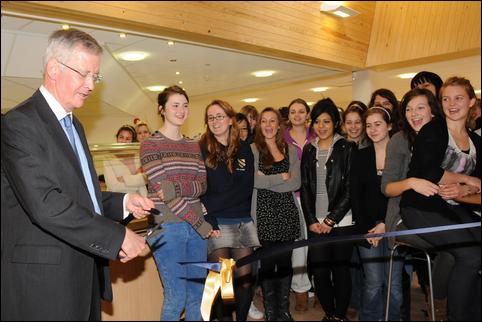 
"Many of you will make a lot of money and buy a lot of comfort and there's nothing wrong with that. But please don't let this be the sum total of your ambitions."

The opening was marked by the cutting of a cake, which was an exact replica of the new wing, and a ceremonial ribbon. Later on, Prof Gilbert addressed the School's Junior pupils, who were treated to ice cream at the celebrations afterwards.

The new block incorporates a new Sixth Form Common Room with twice the area of the old facility and a stylish contemporary bistro on the ground floor.

The first floor provides six new classrooms, a Careers Room and offices for teaching staff. The new building also released space for an improved Nurse's Area, extension of the Drama Studio, and a further classroom and tutorial room within the original school building. 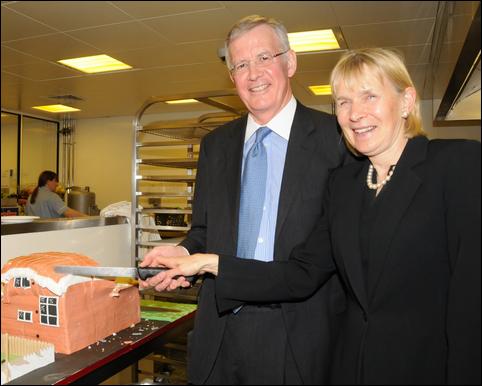 The new wing represents the latest development at the School following the opening of state-of-the-art Science laboratories by renowned research scientist Dame Nancy Rothwell in September 2005.

Headmistress Mrs Janet Pickering paid tribute to former headmistress Miss Marjorie Hulme who established the Withington Girls' School Trust in the 1970s and industrialist Sir John Zochonis for his generosity to the school over many years. Both had joined governors, staff and pupils for the ceremony. A grant from the WGS Trust had enabled the new project to proceed.

Mrs Pickering said: "We are providing first-class common room facilities for our Sixth Form pupils in transition between school and university because it is important they be treated as young adults and independent learners.

"The new wing also offers enhanced teaching space in line with the ongoing expansion of Withington's curriculum. We are delighted with the work done by the contractors, Ellenby Construction, Bolton, who delivered the project two months ahead of schedule and within budget."