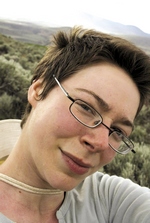 Jen left Withington – her sister Natasha is also a former pupil – in 1996 to study a degree in English Language and Literature at Edinburgh University.

Jen won the T.S. Eliot prize for Nigh-No-Place, her second book of poetry written in Shetland and inspired by the wild landscape around her home and by travelling across Canada, where her mother was born.

Jen said in an interview on BBC Radio 4's Today programme: "The poetry of place is very important to me. I have an impulse in me to find a home in the natural world."

Previous winners of the award, which comes with a £15,000 cash prize, include Seamus Heaney, Ted Hughes and Carol Ann Duffy.

Former Poet Laureate Andrew Motion, who chaired this year's judges, described Jen as "a remarkably original poet near the beginning of what is obviously going to be a distinguished career."

His words were echoed by Mrs Monica Hastings, who taught Jen A-level English at Withington.

"She was always obviously highly intelligent and very creative," said Mrs Hastings who retired from teaching in 2006 after 28 years at the school. Jen had an individual and original voice and great enthusiasm for creative writing – interestingly not poetry, but prose. She came back to school to see us before she moved to the Shetlands and we are all very proud of her."

Jen's father Charles and mother Bonnie live in Hale. Said Mrs Hadfield: "Jen has done very well and she's thrilled by the prize and for the recognition it brings. When she was at Withington Mrs Hastings gave her the confidence and the encouragement to go for it and to do what she always really wanted to do."