Sunshine and snow greeted 40 girls from the Lower Fifth to the Upper Sixth as they spent six fascinating days in Russia during the Easter holiday, accompanied by Ms Jane Maher, Mrs Yorke Menzies, Mrs Catherine Air and Ms Nadine West.

The party first flew to Moscow where visits included Red Square, the Kremlin, the Cathedral of Christ the Saviour, Vodka Museum, University viewpoint and the Matryoshka (Russian dolls) Museum. 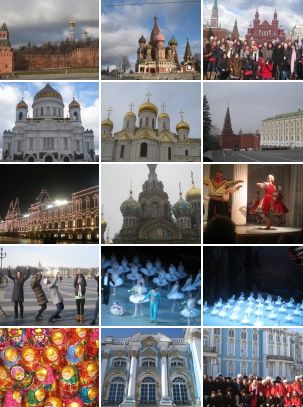 View a gallery of Russia pictures


After an overnight train journey, they arrived in St Petersburg for tours of the Yusupov Palace, where the influential "mad" monk Grigory Rasputin was murdered in 1916, the Hermitage Museum, the Peter and Paul Fortress and the Catherine Palace at Tsarko Selo.

The party also attended a performance of La Bayadère by the Kirov Ballet at the Maryinsky Theatre and a folk evening at Nikolaeski Arts Centre.