The Withington Girls School Lacrosse Club continues to flourish, with a stunning win on 14 January 2009 in the U15 North Schools Tournament.

It was a welcome new year return to Queen Margaret's after the heroics of our First Team last November and once again a winter sun warmed the day, turning a touch of frost into a heavy dew. There was a sense of déjà vu as I arrived at the elegant country school with it's flag at half mast, a sad reminder of losing a staff member over Christmas, and then the moment was lost as the bell ringer signalled the start of the first match.

A positive Withington team began their first match with purpose, and slick passing combined with good movement gave them a 2-0 lead at half time against Birkenhead. A hint of over confidence as well as hitting the post and goalie with a flurry of shots, inspired the opposition and suddenly the score was 2-2. WGS were then on the back foot and lucky to draw a 20 minute game they should have easily won.

The second match before lunch was against the hosts, and with memories still fresh for a number of girls who had been part of the recently vanquished First Team squad, there was an air of caution. Queen Margaret's always produce quality teams and their U15's are no exception, however Withington were up to the task and with steely determination they surprised themselves with a goal in their second attack. Queen Margaret's showed no emotion to this temporary setback and got on with the job by passing & running on a slightly sloping pitch with ease. Despite superb defending, often chasing the ball for up to half a minute, the Withington defence let in two goals and the local supporters in their knee-length tartan skirts were smiling. With seconds to go, against the run of play and out of the jaws of defeat, there was a miracle – WGS equalised ! and the Australian time keeper, on her year out from Queen Margaret's sister school in Melbourne, rang the final bell. A 2-2 draw felt like a win.

As always, the hosts organise a tournament with military precision, and nine teams were split into a group of five, including WGS, and a group of four. Then the two top teams in one group would play a semi-final against the top two teams in the other group to make a final. The lunch break was well deserved and the girls enjoyed a picnic using the mobile cricket cover as a bench. Once again there were delicious sandwiches and home made biscuits & cakes for the staff & parents. The global credit crunch seemed a world away as a hot air balloon hung in the distant sky and a pair of horses trotted up the lane. 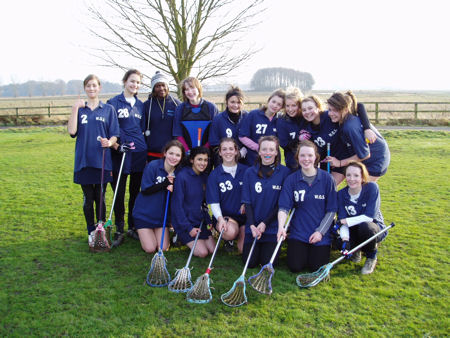 On studying the morning's results it was clear Withington would have easy wins against Sedbergh and Polam Hall, as both had lost heavily. Withington girls are respectful and played both games with good sportsmanship and skill, easily winning 7-0 and 5-1 on Pitch 2. The girls started to tire in the second game as the two matches were played back to back and conserving energy for the semi-final was a good tactic. Due to the points system, a place in the semi-finals was only secured after Queen Margaret's had beaten Birkenhead, as a draw between these school lacrosse giants would have meant Withington going home early and a conspiracy theory to rival Watergate.

Before the semi-final against Queen's School Chester, Ms Appollon called the WGS team into a huddle to motivate and coach in her effective style, with the girls listening intently. Then suddenly the girls broke away to form a large circle with the sticks in the centre, and with vigour & full voice they performed a Maori Haka style war dance that made you proud to be a parent.

The tribal preparations as it turned out were perfect, and at this point you had to remind yourself that if was only a schoolgirls U15 lacrosse tournament, as the Queen's School Chester lacrosse team took the field in white XXL rugby shirts and they meant business. On average the Chester women were 6 ins taller, seemed 2 years older, were the only team coached by a man and as a consequence played like men !

However, Withington have their own big hearted players and it was game on.

Right from the draw, the game was fast with clever passing, penetrating runs across the fan, fierce checking and any loose balls were picked up with the turf. After an interception Queen's headed for goal and their place in the final looked a formality as Withington went behind. Then a moment of careless checking led to a Withington girl getting a knock to the head. After a warning from the referee the Chester player smirked and had to be warned again. This was a defining moment and the Withington girls rallied with two quick goals. Fortune favours the brave and from the heroic 300 Spartans of Thermopylae to the Charge of the Light Brigade, history is littered with tales of bravery, when death was as likely an outcome as glory – Withington were in the final and the Amazons and their coach from Chester were defeated !

The final against the hosts, Queen Margaret's was a game to savour. Withington were on a high, and for many of the squad this was their first time in any final. The game moved up and down the gently sloping pitch with fluid passing and skilful cradling with blocking and harassing by both teams of a high standard. For Withington this was a much easier game than expected after their hard earned draw against the same opposition in the morning. Both teams were well supported on the touchline, with Mrs Kelsall and the U14's, who had done so well to reach the semi-final of their own tournament, cheering loudly. Withington could hardly believe their luck as every shot hit the back of the net and were worthy 5-1 winners. At the final bell the girls jumped for joy and hugged each other, and Queen Margaret's coach praised the fitness of the Withington girls. 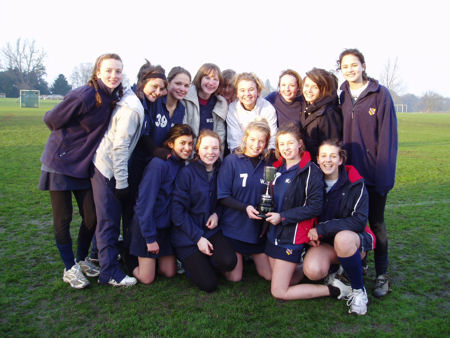 With fading light and warm applause, the Withington girls were presented with a fine looking cup by the headmaster of Queen Margaret's, as the best U15 school team in the north, at the fastest game on two legs !