Wednesday 12th November was a perfect autumn day for the North Schools Lacrosse Tournament. The blue sky was crossed with vapour trails and golden leaves floated in the air as I drove up the winding lane to Queen Margaret's School in Escrick, built in 1758 and set in almost seventy acres of beautiful parkland. 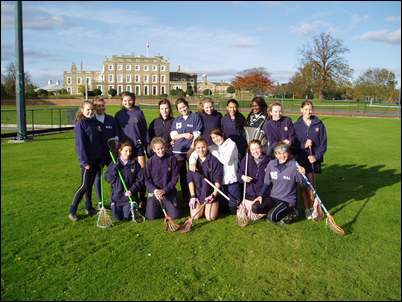 I arrived in time for the second match of nine, to see our girls thrash Ampleforth 9-0, having already beaten Bolton 2-0.
Playing the hosts immediately after an easy win, caught Withington off guard and they lost the third game 2-0, rarely getting the ball and having to defend in numbers. They left the field crestfallen, and trudged off for a pep talk before the last game of the morning against Polam Hall.

Mrs Kelsall and Ms Appollon, who were outstanding in their coaching, organisation and motivation of the girls, soon raised the spirits of a squad spanning LV to UVI and an easy win preceded the lunch break.

Queen Margaret's hospitality is always generous, warm and down to earth, and lunch was a picnic by the pavilion, as the girls chatted and enjoyed the sunshine. There were also delicious sandwiches and home made biscuits & cakes for the staff & parents !

The tournament took the format of a round robin and with 10 teams in the competition there were 5 more games after lunch. The first match of the afternoon was against Queen's School Chester on Pitch 3 and the girls continued their fine form with yet another victory. By now the girls were looking like champions, however the only way they could win the tournament would be if the hosts lost one game, as WGS had a better goal difference.

Further success against Mount St Joseph, Moreton Hall, Casterton and Harrogate kept the pressure on Queen Margaret's until the last match, but the hosts did not wilt and their captain received the trophy.

Queen Margaret's are an extremely good team and for Withington to finish runners up, with only one defeat in 9 matches against some tough opposition, was terrific. We have a talented squad of young players who will be looking for revenge next year !

As the sun dipped behind the magnificent country house, that is Queen Margaret's, the car tyres crunched along the gravel drive, and we drove away from the manicured playing fields, groomed tennis courts, swimming pools and equestrian centre, having enjoyed a wonderful day in the life of a Withington girl.

It was a pleasure to meet Mrs Kelsall and Ms Appollon, they were very welcoming, popular with the girls and a great addition to WGS staff.