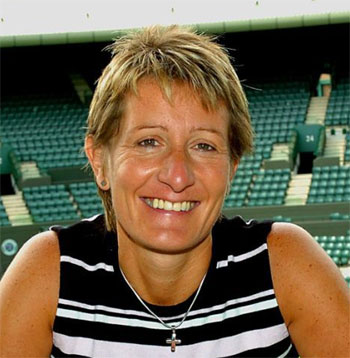 Denise attended Withington from the first year of the Junior School until leaving after A Levels in the summer of 1979.

Whilst in the Junior School, Denise took up tennis and fell in love with the game, deciding to try and make a professional career within the sport. Coming from a sporting background she was supported both at home and at school and special thanks have always been due to Marjorie Hulme for allowing her time to pursue her goal.

Denise began to train full time when she left Withington and began playing professional tournaments in 1981, winning the British under 21 title that year. She progressed to play for and captain England on several occasions, and travelled internationally for 10 years, playing on the professional circuit, including Wimbledon in 1986 which was a dream come true. Unknown to her at the time, the All England Club was destined to play a large part in her life in the future.

When she retired from playing professionally in 1990, she started along the long road of climbing the professional referee ladder for the necessary qualifications and reputation needed to be able to work professionally as a tennis referee. (For those not familiar with this term, the referee is the person with overall responsibility, as opposed to the person sitting up an umpire's chair on court).

In 1990 she also became the trainer for some 80 data entry personnel responsible for all the scores and statistics which appear on TV screens at Wimbledon each year, an annual task she continues to enjoy, as well as coaching four national junior champions during ten years of coaching at The Queens Club and Hurlingham Club in London.

In 2000 it was back to the classroom to pass some exams to become an International Tennis Federation Silver Badge Referee (International grades run from white, bronze, silver and then gold). Success here led to life back on the road again for around 20 events a year including the Olympic Games in Athens.

In 2006 Denise was awarded the highest qualification of ITF Gold Badge Referee, a prized possession held by thirteen women out of the fifty Gold Badge holders across the world. The same year she was approached by the All England Club to become Assistant Referee at The Wimbledon Championships, a position she still holds. In the last twelve months she has also worked at two of the other Grand Slams in the USA and Australia, Federation Cup ties in a variety of places ranging from Greece to the Ukraine to Mauritius and Professional Tournaments in far flung places which include the Czech Republic, Georgia, Indonesia, Japan, Moscow, Slovakia and Sweden.

If any of the staff or friends in her year are at Wimbledon this year Denise would be delighted to meet up again. She can be reached through the Referees Office before play starts any day during the tournament fortnight and would love to hear from any one of them that she has not seen for nearly 30 years!

Return to Spotlight On page