On Thursday 22nd November the Junior School was delighted to be visited by the Royal Shakespeare Company. They performed excerpts from A Midsummer Night's Dream . It was a spectacular event and I will give you a taster of the story, which was set in Athens, Greece.

In this play there are four main characters – Demetrius, Lysander, Hermia and Helena. In this twist of a story, Hermia's father says that Hermia must marry Demetrius, but she is in love with Lysander. Her father goes to the Duke who decrees that Hermia must marry Demitrius, or marry no-one. Hermia will not accept this and she and Lysander decide to run away. Hermia tells only her best friend, Helena, who, just to complicate things, is in love with Demitrius. They all end up in a spooky wood and soon discover that they are not alone. They are among the fairies and that is when the trouble really starts! 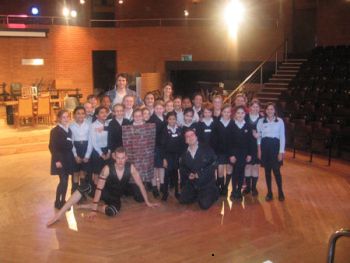 Later we all got the chance take part in some of the scenes and by the end of the day we had all discovered that learning about Shakespeare's plays was a lot more fun than we thought it would be!

By an Upper II pupil