13 February 2007, 3:26 pm
An inspector called….and was full of praise for the Upper Fourth geographers' local 'Crime Survey' in and around Withington village.

Greater Manchester Police's Inspector Peter Forster, who leads policing in an area that includes Rusholme, Fallowfield and Ardwick, attended the School to hand out certificates to girls who had compared two local roads and mapped the characteristics of houses that could make them vulnerable to burglary. 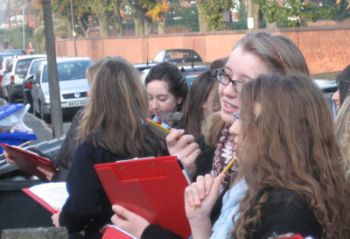 The survey used 20 indicators and scored premises accordingly. The girls also noted signs of urban decay and interviewed residents about their perception of crime in the area.

Head of Geography Mrs Julie Buckley, said: "The results were fascinating because the two roads were in close proximity but so very different. Not only was the exercise relevant to modern geography but it made the girls very aware of the local area and consequently they are less vulnerable, which I am sure will be important to parents." 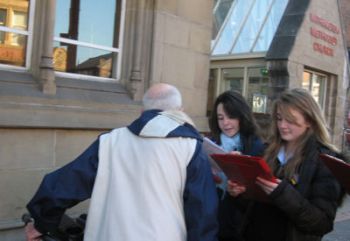 After assembly, Insp Forster took part in a seminar for Upper Sixth geographers, discussing how mapping skills have been used as a key technique in identifying features of landscape and architecture that give an advantage to felons in Rusholme and Fallowfield. He demonstrated that having identified vulnerabilities then linking with other interested parties, such as the Council, how he and his team had instigated changes – such as gating alleyways – that attempt to modify the risks.

This partnership and initiative, called Operation Marlin, has seen the rate of burglary in the area reduce by 70%. Insp Forster's talk was an invaluable supplement to the girls' A-level studies enabling them to see the relevance of this spatial analytical approach to improving safety in local inner city areas, especially as it is happening in our own locality.

Mrs Buckley said: "I feel this is exciting Geography where our skills are applied to real life situations."