Olé! On Friday 29th September, we celebrated the official opening of our new state-of-the-art language laboratory with a flamenco flourish.

Mrs Maria Lopez Anderson, Head of Spanish, donned traditional gypsy dress and is pictured leading Fifth Formers through the dance steps.Girls sang German folk songs, staged a French quiz and Junior pupils engaged in salsa classes during a day-long festival of the cultures that come with the languages taught at Withington.

The new multi-media language laboratory was opened by Mrs Katharine Perera, recently retired as Chairman of Governors and Professor of Linguistics at Manchester University, offers the latest computer-based audio and visual aids to learning and will be in constant use over the course of the school week. 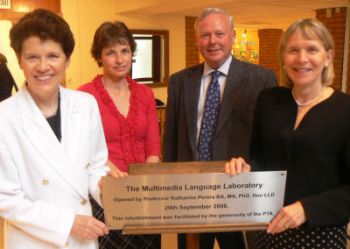 Unveiling a commemorative plaque, Professor Perera said: “Speaking someone else’s language is a very important act of courtesy which enables us to make friends, begin to read the books and poems they read, watch the films and television they see and so enrich our lives.”

We were also very pleased to welcome Dr John Penney, Fellow of Wolfson College, Oxford, and a leading expert in the History of Languages, who gave a lecture to the Sixth Form in the Arts Centre. In 2005/06 eighteen girls took A-levels in Modern Languages with more than 90 per cent achieving ‘A’ grades.

This project, which will so enhance foreign language teaching at Withington, was made possible, very largely, by a donation of £10,000 from our PTA. Our very warm thanks go to the very hardworking PTA committee, and to parents and friends who have supported PTA fundraising events.

The opening of the new lab was the climax of an entire week themed as Modern Foreign Languages week right down to the last detail of offering School lunches which included French, German, Spanish, British and Italian cuisines from Monday through to Friday.